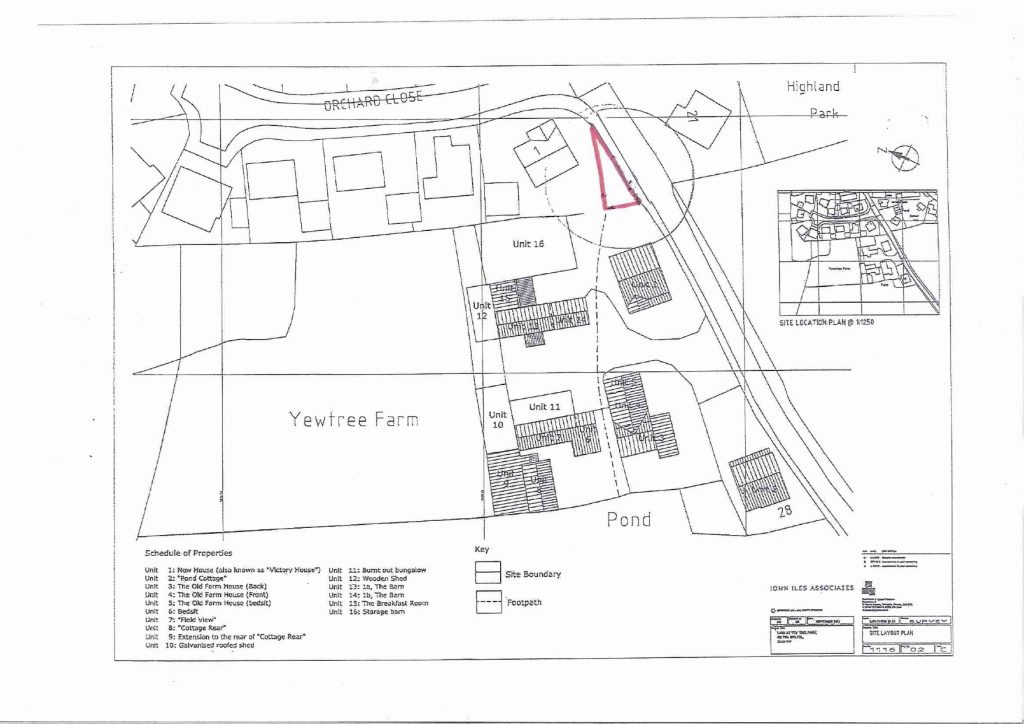 I’m told this property originally received an offer of £2.3m in 2007 but the owners refused and asked for £3m. £2.3m would have been a fair price in 2007 but we all know what happened next. So I think the buyer had a lucky escape.

It also appeared on RM with an AP of £1.85m http://www.rightmove.co.uk/property-for-sale/property-35226979.html  but when I found it, it was unsold at auction with a guide of just £950k. There were 8 houses on 1.5 acres and it’s quite a high value area so clearly something strange was happening…

Hollis Morgan the auctioneers said they could meet me on site but couldn’t get access inside any of the properties – now this was getting interesting! The reason was HSBC had been instructed as executors of the will and were forcing the sale, but the owners were doing everything in their power to prevent it, including denying access and threatening potential buyers. In doing so they had massively reduced the value of their own property. All normal sane buyers had decided they were too much trouble and to find themselves another deal. I’m not a normal sane buyer and can be really, really persistent so I kept going back to the auctioneer to press for access and after several abortive journeys, finally HSBC must have threatened something because one fine day all the unoccupied houses were unlocked. Internal inspection revealed they had all been subdivided into much smaller units and let to LHA tenants. They were horrible little rabbit-warrens and maintenance had been neglected, roofs leaked and some were semi-derelict. It’s the second time I’ve seen this, portfolio landlords with so little regard for their tenants that they don’t carry out a few minor repairs that would keep the places liveable. So the tenants leave, the income stops, mortgages can’t be paid, massive internal damage occurs and they lose the lot. I did a quick assessment and works needed came to IRO £228k. Sold comparables were yielding about £1,800/ sq m, but these were out of date and Bristol prices were already rising strongly. Also all but 2 of ours were period houses with two built in 1723 & loads of original features. So working off £2k/ sq m the GDV was £1.74m.

I offered the auction guide of £950k which was accepted, the auctioneer forwarded it without even asking for PoF which surprised me, but I’d been in their office so many times by then and we’d already struck up enough of a relationship so presumably they were confident I knew what I was doing.

Moving into the £1m price bracket was a big step for me and to be honest back then I lacked the confidence, so I went in with a JV partner with a lot more experience who made many useful suggestions and was also later instrumental in getting a quick sale of my share. He arranged the finance but what I assumed from the discussions we’d had was that we were all cash, so we exchanged contracts were committed to buy.

The next obstacle came when my JVP announced that we needed to get a surveyor in to value the properties for the private bridging company – big shock and my fault I should have checked. Again we made several abortive attempts where the owners said they would give access but failed to do so and surveyors came out for nothing. We HAD to get him in because if we failed to complete we’d lose our 10% deposit + costs + the deal, so I HAD to make it happen.

On the last attempt the owners had removed a security camera, presumably because following exchange we were responsible for insurance and they weren’t going to help us in any way… But there were a series of mysterious break-ins, just one window to each unoccupied house, which was very convenient…

I met the surveyor at 2pm and with a step-ladder got him in through each of the windows. At about 4pm the two men (relatives of the owner) who lived in the one occupied house came back and there was a lot of shouting and threats, which I was prepared for and dealt with (AKA the gumshield story, ask me about it privately but no one was hurt). Then they went inside and called the police, claiming I was trespassing and that I’d threatened them. If ever I have to deal with the police I find it best to behave as if I have every right to be doing whatever I’m doing, as criminals tend to run or be evasive, and I’m not a criminal. So I explained that I’d already exchanged contracts and was responsible for insuring and securing the site, and that I couldn’t possibly have threatened them as there were 2 of them and only one of me. They agreed, said it was a civil matter and drove off.

That wasn’t the end either as over the next few days I had death threats on my phone. I reported it to get a crime reference number but didn’t take it seriously because the caller left a voicemail and didn’t withhold his number. Googling the number led to a social club in Sunderland. A scary Geordie accent but not very professional and a long way away so I wasn’t that bothered.

Even that wasn’t the end as they then signed a statutory declaration to say they had a fixed tenancy granting them the right to live there for the rest of their lives rent free. Obviously we didn’t believe them so called their bluff, offered to complete anyway but with a retention of 50% for having to work around them. There was a lot of rubbish and animal excrement over the whole site spreading from that house so we’d have to partition it off in some way and clear the rubbish before we could proceed. It worked, perhaps the owners decided that if we were going ahead anyway they might as well have the whole amount and we got a call from the auctioneer to say they’d left.

To complete the deal we had to put in just £5k as the valuation came in so far above the £950k we were paying that 70% LTV covered £945k and costs. We were buying in a SPV but the bridger insisted that both directors sign the PGs. I never like signing joint PGs as they make me jointly and severally responsible for the loan. If anything happens to the other signatory you can become solely responsible for repaying the entire loan. I didn’t want that. So I had to trust my JVP and assign all my shares to him to avoid signing it. The deal went through on a handshake with me having no security at all. You have to be very confident of your partner and your position to do this.

The purchase complete, I wanted to exit ASAP. Why? Well, I was absolutely delighted to have completed such a fantastic deal, but a bit daunted about what to do next. These would not sell individually as easy auction flips because they were some way outside Bristol, quite big houses, all on one site that also needed a lot of landscaping, kerbs laying etc and not readily refurbishable individually. That would deter retail buyers. I was clear that I didn’t want to manage 8 refurbs and a new-build project for 6-8 more houses on the vacant ¾ acre. It would potentially make a profit of £2m but would take over my life for 2-3 years. I wasn’t personally well capitalised so would be entirely dependent upon Gmy JVP for funding, and if anything happened to him I’d have £1m of borrowing at 1% = £10k a month to find. I also wanted the time to hunt down more deals, that’s what really excites me.

This may seem strange but until I’m better capitalised I’d rather crystallise a gain quickly to minimise risk. I’d rather gross a quick £250K/2 by flipping with no work, than £2m by doing major renovations and a much longer hold. In terms of time spent there’s far more value that way. Also far more can go wrong, the market can change, the money can get swallowed up in renovations or elsewhere, the previous owners could sabotage it out of their own spite if I was still personally involved, and it was just a lot of work refurbing houses, something I’d already been doing for 30 years. I wasn’t too bothered about letting it go because I know there’s always another deal out there and I don’t have to wring every penny out of every deal.

I still wanted to keep the potential building plot but I put out about the houses on my network for a quick buyer at £1.2m and one came back immediately, but he wanted some sort of creative seller-finance deal and it was all looking a bit complicated and not a quick exit. Then my JVP turned up with Edward Clynes who liked what he saw and a deal was agreed at £1.2m. I had to accept loss of control of the vacant land but negotiated a 20% overage clause on it, less than I’d wanted but I’m not grumbling. It’s the perfect investment – no money, no time, no work, only upside.

It suits Edward as he’s already a successful businessman in his own right, import-export and other non-property stuff. He had enough funds to see it through and was looking for a big project to manage and someone to work with to learn from and guide him through the renovation process and adding value. He’s since invited me over to see what he’s doing and he is making a fantastic job of maximising the values of everything. One absolutely stunning change they’ve made to the large house on the left of the gate, just by cutting back the hedge to the south and fitting a huge set of four bi-fold doors to bring the light streaming in and reveal panoramic views over the fields. They expect to make much more than my estimated GDV of £1.74m by utilising good design and spending more than my £228k costing on works. £3.2m in fact, and that’s without the planning gain. Personally I think that’s optimistic, but I tend to underestimate GDVs as that way any surprises are good ones.

The real prize would be getting planning for another 6-8 units on the vacant land.

All the neighbours tell him they’re absolutely delighted and relieved to get rid of the previous owners and all their mess, they have a reputation for being unpleasant and threatening so I’m happy I did the right thing by removing the obstacle and enabling these houses to be brought back into good use.

I have permission from the people named to publish their names in this blog.