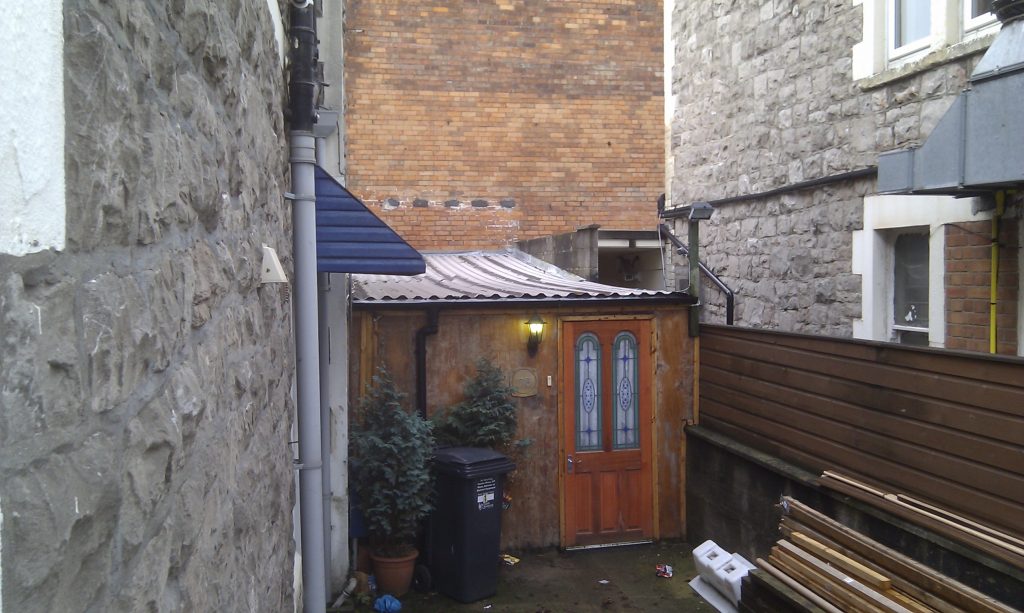 Like any refurb, the first thing to do is rip out all the stuff you don’t want any more. In this case there were a lot of tiles to come out of the old kitchen and bathroom, which came off easily enough. But the adhesive was very thick in places and extremely stubborn! The kitchen furniture was only good for the tip, but I’m hoping to re-use the bath, basin, toilet and immersion heater tank, so I’ve disconnected them and they are now getting in my way in the lounge. 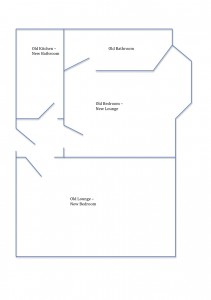 We decided the layout needed changing as it was pretty hopeless having the bathroom taking up valuable space in the bedroom and a windowless kitchen. The bedroom is to become the lounge with a kitchenette. The bathroom will go in the small windowless room. Surprisingly there will be room for a bath, loo and basin. When we bought the flat the bathroom partition was already partially dismantled, apparently due to the previous occupants botched attempt at dry rot removal. So that meant I had a bit less ripping out to do! Unfortunately there was also a hole in another wall, which I have now repaired. 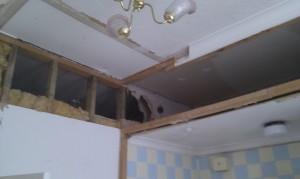 The kitchen was in a small windowless room. We are still not sure whether we are going to let or sell, so it’s tricky making decisions about the exact spec. The spec for BTL has to be hard-wearing and inexpensive, so I normally prefer Howden’s kitchens for that. The spec for sale has (in this case) got to look classy and neutral without being too expensive. Ikea Adel Birch is light and perfect for this flat. We’ve decided to go the Ikea kitchens route as it keeps options open for letting or sale. I already have these in two rented flats and they have held up surprisingly well. This will always be a smallish and fairly low-end flat there is no point in using anything flashy or expensive, we just have to make it neutral and pleasant. I’ll try to incorporate a Unique Selling Point, but I’m not sure what that will be with less than 30 square metres to play with! 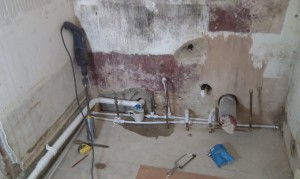 New supplies and wastes for bath, basin, toilet and shower.

Unfortunately there is no gas, so I’ll also re-use the existing electric emersion heater tank, and I have a nearly-new electric shower from another property I can also re-use. I’ll do most of the plumbing myself even though it’s not my trade, as without gas there are no certification issues. 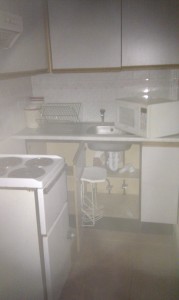 The old kitchen before I started work.

It’s been fairly straightforward as the supplies are already there as I’m simply swapping a bathroom for a kitchen, so I don’t have to run a new supply in as I would if converting a bedroom, say. Also I can re-use the old bath waste for the new kitchen sink, and most of the old copper pipes linking hot and cold supplies between the two rooms. I’m running most of my new pipes in plastic as it’s easier and quicker. However it took about a day and a half to drill the cores for the bathroom waste pipes through the solid walls, two feet of metamorphic limestone and very hard. After that, connecting up to the existing soil stack outside was a doddle.

I’ve got an electrician in for the wiring. I could attempt it myself then get it certified, but I’m not fully conversant with all the 17th edition regs so I could waste a lot of time and materials if my work has to be re-done. Incidentally there is a lot of misunderstanding about what can and can’t legally be done by a Certified Electrician. It is not illegal if the work is done properly and by a competent person. If there are issues with the work or someone is electrocuted, if you can demonstrate competency you are in the clear. A certificate is not mandatory, but may be necessary if you wish to sell, and for your own peace of mind if you wish to rent.