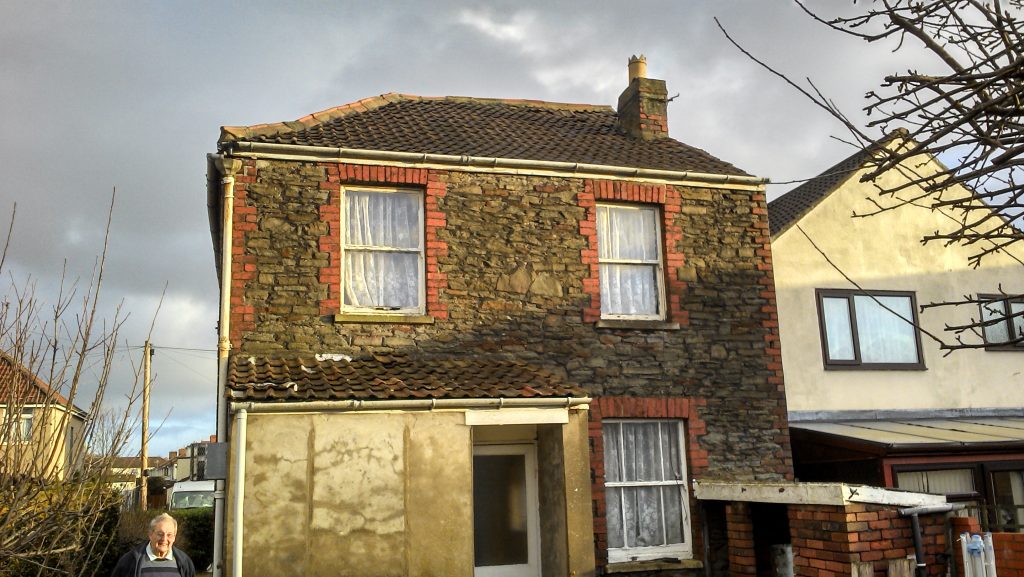 I love subsidence – or rather peoples’ fears about it, and I’ve done very well out of it. But when is subsidence not subsidence?

It was for sale via a local estate agent but no one would buy as everyone thought it had terminal subsidence. It didn’t. One of the side-walls was peeling away because it should have had another house built up against it. All the other houses on the street were semis but for some reason this one never had the other matching semi built against it. Consequently what would have been the party wall had nothing to lean against so was moving away. Remedial works would be steel straps through the floors and ceilings to the opposite wall. Or by just taking the whole wall down and rebuilding on new foundations. It also needed a new roof and full renovation, much more than mere refurbishment. You can see how much the walls were leaning by the angle of the curtains in the picture below.

I offered £105k and at first the seller refused but I’m used to that. I don’t usually increase offers so just used the silent negotiating technique and walked away. After a few months and with no other offers they accepted, that was in early 2013. It was under probate so nothing more happened for about a year, when I got the call to say they were ready. Naturally I wanted to re-inspect the property to check condition, and the leaky roof was a lot worse. I felt sorry for the seller, he was worried the whole place was about to fall down. He practically begged me to buy it for just £95k. I answered “I’ll have to ask my business partner, it isn’t the property we agreed on” and tried not to look too eager. I’m sure I could have bought it for even less, but it was already such a give-away I didn’t have the heart to chip him any more.

We completed in early 2014 and entered it into the June 2014 Maggs & Allen auction http://www.maggsandallen.co.uk/auctions/results-of-previous-sales.html It was guided at £95k, what we’d paid. There was strong interest due to the low guide so I felt confident we’d get £130k or so. But I made two schoolboy errors. The auction date was also the first day of the World Cup, I should have checked for coinciding events. And I allowed it to be listed as Lot 2. I’ve since realised lots 5 – 15 are better. Best to wait until the room has ‘warmed up’, but not until it starts winding down.

Auction day comes and I’ve arranged to meet Jonathan Stein there as we both have 2 lots in the auction. It seems very quiet and we’re concerned about that. So we split to opposite sides of the room to bid each other’s lots up to guide price, moving them on quickly. Anna Maggs the auctioneer doesn’t bat an eyelid, she sees all sorts of antics. Then Jon accidentally bids ON my guide so almost buys it!

Except the bidding carries on… It reaches £130k and I’m starting to feel confident now, the anticipated price reached, phew! And the bidding goes on… and on… At one point Jon gestures at me in amazement but I keep a straight face, mustn’t give away that it’s my lot until it’s sold. It goes all the way up to £159K! Wow! This is EXACTLY the same house I paid £95k for not 2 months earlier.

The end buyer should still make a profit, spend £45K + transaction costs and it would be worth £250K easily in today’s market. But I don’t want to do the work. I love seeing what other people achieve maximising value and developing beautiful homes. It’s what I used to do every day for 30 years. But those strategies are low Return-on-Effort unless you can delegate massively. I don’t have the staff, not yet, I’m still just starting out so keeping it lean and mean.

Profit wise this runs close to the Bedminster Down Road one we sold earlier in 2014, in April, slightly less profit but as a fraction of purchase price slightly more as the numbers are smaller. Which is crazy as I bought that as a two-for-the-price-of-one deal and this was just a really crappy house.

Did I talk about RoE? No not Return on Expenditure, Return on Effort. The beauty of auction flips is they offer maximum RoE, much quicker than getting bogged down in planning and redeveloping, or extended refurbs. Return on Effort is more important than Return on Investment if you want to grow your business. With high RoE you have more time to chase down deals, that’s where the money is and that’s what I enjoy most. As the saying goes, you make your money when you buy not when you sell. There are many low-RoI strategies but they just look like work to me.

Here it is for sale http://www.rightmove.co.uk/property-for-sale/property-49655560.html