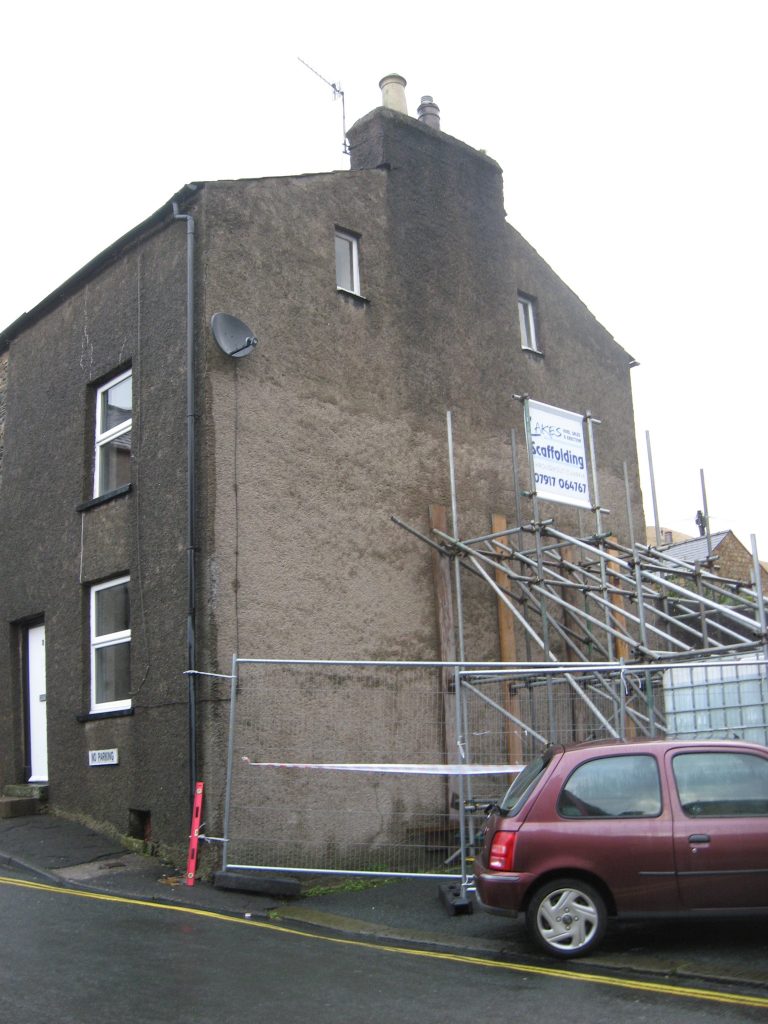 This was a really sad story with a kinda happy ending. Owner never lived there but his mother in law did. The owner suffered double bereavement (wife & brother) in separate RTAs. He also lost his commercial diving business due to investigation when one of his divers falsified his own health status from his doctor and died underwater. As a result had been on IVA for 2 years. To top it off he has a heart defibrulator fitted under the skin of his chest. There were so many tragic elements to this story I would almost have thought he was making it up, except he showed me the shape of the defib fitted under his skin – quite big! Just when you’d think it couldn’t get any worse, there was a partial collapse of the basement in the house and the council placed scaffolding against the side of it under the Dangerous Structures Act. Then the pub owner next door threatened to sue for loss of trade due to it blocking his car park. The owner had no money to solve the problem, and was having anxiety attacks over it, it was an awful situation.

I knew what to do about the basement (shore it up then fill the affected area with concrete) and agreed to buy for 22k. But the pub owner wouldn’t communicate properly or give me a settlement figure, only threaten, so the risk from the pub was unquantifiable and much as I felt sorry for the owner, the only sensible thing I could do was tell them I couldn’t take on their problem – and it was THEIR problem until we exchanged contracts, not mine. I told the pub owner that the scaffolding could be blocking his car park till kingdom come, because no normal sane buyer would buy it with a partial basement collapse AND an unquantifiable financial claim against it.

Things finally moved when the owner offered to GIVE me the house for nothing just to take the stress and the pain away. It seemed unlikely that my financial exposure would be greater than 22k for the duration of my ownership, so I agreed, but it would have been like taking candy from a baby so I insisted on keeping as close to our original agreement as possible. You have to know when something is a deal and when not to milk it. I’d already given him 500 in cash so he could enjoy christmas with his new family (he had re-married) despite the IVA, so gave him another 8k to settle the 5.5k charge the council had placed on the house for the scaffolding (which needed settling anyway), and the rest for his conveyancing bill and about 2k to be going on with.

I offered (without prejudice) to settle the damages claim from the pub owner for the entire period of car-park blockage, to clear it completely for my vendor, as he wasn’t in any condition to negotiate for himself. Most of it was during the winter months anyway when trade was quiet, it’s only with the better weather that it was becoming a real problem. Eventually after a lot of persistence I got an approximate settlement figure, just under 6k so not nearly as bad as it could have been, and some of the items I’m contesting anyway. I’m hoping to get it down to 3.26k.

Then I’ll pay the vendor his 22k, minus the 8.5k already paid and the 3.26 or whatever to settle with the pub. In the end I paid £16,750. It wasn’t legally binding, we had nothing but a gentlemen’s agreement, but as I often say, it isn’t just about the money. Money comes easier than happiness. In so doing I hope to restore his faith in humanity a bit as he’s had a real kicking over this, and of course I’m helping myself too. If you want to feel happy, the best thing you can do is help someone else, especially when you don’t have to. It really works you know! Try it!

It may value up at 100k when they do all the works and the refurb and open out the yard for parking. But the real value in a slowish market is the 90 day val, and that’s about 80k.

Cost of works up to 10k for the structural work, shuttering against the basement collapse and fill the shuttering with concrete. Steel rods through the floors and ceilings to bind the back and front walls together, they are adrift currently.

I have indemnified the new owner for any further claim from the pub owner for the car park blockage in its current condition, up till 30th July to give them time to do the works and remove the scaf. My negotiations with the pub owner include this period.

I commissioned a structural engineer’s report to tell me what I already knew, but also as belt-and-braces as he has PI, and to put the report in the Legal Pack to reassure prospective buyers. Colin the auctioneer said they had so many requests for viewings they had to do block viewings 2 x weekly!

It sold for 42k and I never + 35k works = 77k so there’s no money in it. Especially if you add in conveyancing, auctioneer premium, finance, insurance, and agent fees if they are selling. But auctions are a great place to sell crappy knackered old houses 🙂